Cree XP-L2 LEDs are currently world´s most efficient 3x3mm LEDs reaching up to 220lm/W. That´s why we are using them in all our headlamps. We choosed LEDs model with color temperature 4500K, which is neutral white light with good color rendition. They are more efficient than Cree XP-G3 or Cree XM-L2 line.

LEDs are todays most efficient source of light. No other kind can produce so much lumens with similar input power. LEDs are small in size, virtually indestructible and with high lifetime. Thats why they are used in flashlights, headlamps, bicycle lights or in cars, offices and households. Their amazing light output and efficiency is key part of our headlamps.

Many different sizes and types

LED chips are made by many large companies. Apart from best known Cree they are Osram, Nichia, Lumileds (Phillips), LG, Samsung či Seoul Semiconductor. There exists many different types and sizes, each one has its own field of use. LEDs can be coloured, white with various color temperature, weak or powerful from sizes of 1x1mm to 25x25mm. It doesnt mean, the larger, the better.

Small lights use square LEDs in size of 3-5mm. For these LEDs you can buy reflectors and TIR optics small enough. Larger LEDs require larger secondary optics. When dealing with the largest COB arrays its really hard to make resulting beam narrow and not produce artifacts. These large optics or reflectors are few centimeters wide and deep.

Cree company, which makes XP-L2 LEDs we use in our Lucifer headlamps declare 50000 hours, after the brightness drops to 70%. Its based on some methodology and estimated from 6000h sample with 3A current flowing through the LED. When considering lower currents, lifetime is larger. That means, if anybody uses headlamp everyday for 1 hour, 50000 hours would be after 99 years of use. I think its fair to say these LEDs would work forever when they are properly cooled.

Maybe you have bad experience with LED strips in your kitchen that one after other failed. But thats very different product and cooling is not good. Sometimes these LEDs in strips are bad quality chips from various chinese manufacturers and current is set too much. LED strip itself has got large thermal gaps and cools down poorly. LEDs degrade over time, generates more heat instead of light and then completely fail. In our headlamps its completely different story, we use the best cooling methods, copper printed circuit boards and all the things which maximize heat radiation.

LED efficiacy – how much LED shines – is dependant on the current flowing through. Every LED has got greatest efficiacy with the smallest current. When we need to have more lumens, its efficiacy is lower but most of time still good (over 100 lm/W).

If we take for example Cree XM-L2 diode, bin T6, with 100mA current it produces total of 24 lumens with efficiacy of 180 lm/W. Unfortunately with 1A current just 145 lm/W and with maximum permitted current of 3 amps, its efficiacy is only 102 lm/W. The best current 3mm LED is Cree XP-L2 which we use in all our lights. These LEDs reach amazing 200 lm/W efficiacy with small currents.

With this knowledge its good to have more LEDs chips in the headlamp working under their full current limits. Ideally with so much current that the efficiacy remains still good. But there is one downside, more LEDs means also more costs and make the lamp larger. So in reality there has to be always some compromise between number of LEDs and targeted efficiacy.

Second, less important factor, is the temperature of LED junction, the point in the middle of LED. The lower temperature, the better efficiacy. LED efficiacy figures are over temperature range of 25 to 85°C. The difference between these two temperatures means 8% difference in brightness. But its not possible to keep temperature of a LED so low as 25°C during high currents, even 80-85°C should be hard to reach when the cooling is not properly designed and tested. Some lights out there definately reach much higher temperatures like 100-125°C, locally overheats and looses brightness over time.

This is printscreen of XP-L2 LED from website pct.cree.com, where you can easily evaluate voltage, luminous flux, efficiacy with different current and temperature.

Beamshapes and ways to narrow the light

LED produce light in very wide angle 125°, that is too much. The beam must be narrowed with secondary optics - TIR or reflector. Both ways can reach good width of a beam and make throw to distance longer. Wide illuminance help orientate in a space, unknown terrain. Large throw to distance is good when riding fast on your MTB. Common reflectors are plastic with aluminium reflective layer with efficiacy around 70%. When using reflectors, there must be some glass or transparent plastics in front of it. Losses on this covering glass are between 8-3% and depends on exact type of material and if anti-reflective layers are present.

Better altenative is TIR optics, which is made from PMMA or PC, both hard materials which do not require any other glass. Efficiacy if TIR optics range up to 93% so the losses are very small. Beam of light is very smooth without any sharp transitions. In our Lucifer headlamps we use only TIR optics with different angles which produce excellent shape with good side illuminance and large throw.

The most efficient (lumens/Watt) are always blue or green LEDS with color temperature over 6500K. That is the reason why so many chinese lamps are using them. LEDs with neutral white color are little less efficient or come to the market later. Color temperature is key parameter when you need to recognize natural shapes and differentiate colors. When sporting you especially need to differentiate obstacles, fallen branches from rocks or other green vegetation.

In our headlamps we use LEDs Cree XP-L2 with color temperature of 4500K. We have tested many different types and temperatures, compared them and these ones are really the best. We consider them to be as neutral white as we can tell. In past we used 4000K and 5000K which were also very good, but these 4500K are winners. Nothing over 5000K is eye pleasent.

Common downside of LEDs is its low Color Rendering Index. CRI value can be between 0 and 100 and tells how vivid and true colors are on things when you light them. Lihtbulb has got 100. LEDs have usually from 65 to 95. LEDs with CRI greater than 90 are sometimes called HI-CRI. For photography, shooting or medical use, these HI-CRI are preffered. Following picture shows differences between CRI values.

Such poor rendering of some colors is because LED do not generate light in all wavelengths equal. Human eye can see wavelengths from 390nm to 700nm. The problem are wavelengths around 480nm (blue color) and unevenness of the whole spectrum.

Lucifer headlamps uses latest and the most powerful LEDs available, currently XP-L2 from Cree. We use LEDs with color temperature 4500K which are neutral white and have CRI 70. On previous models we had user selectable alternative of HI-CRI XP-L2 LEDs with minimum CRI90. These new LEDs are perfect in any color sensitive apllication even not having CRI90 figure. We tested them thoroughly and they perfect so for now we dont offer anymore CRI90 variant.

CRI doesnt tell the whole story, its based on color shift calculation of 8 color samples. For example it doesnt say much about rich red color - R9 index, which is important in some applications. During the time, some other indices and methodology evolved, e.g. CRI2012 or CQS, which count its own index based on more or different colors. 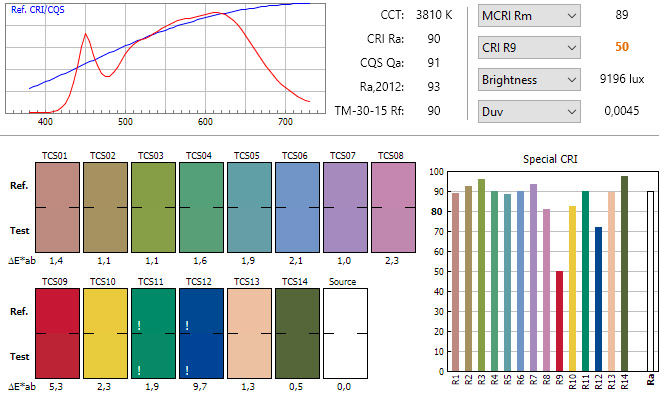 LEDs also come in many performance bins which say how bright they are. And also come in some chromacity groups which are small circles or square with similar chromacity plotted with the Black Body Curve. There is full research field Spectrography which deals with all these colors, values and parameters. Be sure, we try our best to buy perfect LEDs in terms of colors a brightness, which we use in all our headlamps.